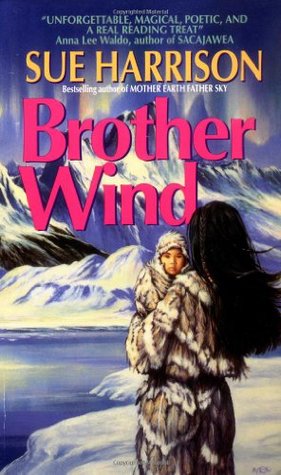 Brother Wind is the third book in the Ivory Carver Trilogy by Sue Harrison.  As the third book, you certainly don't want to skip the first two before reading.  Especially since the 2nd book has the events immediately leading up the third book's story.

Brother Wind returns us to Kiin and her problems.  She has her twin boys who are both wanted and feared by many people.  And she herself is wanted for her ability to carve and produce sons.  But not all who want her are doing it for her best interests.  Again power plays a large role and Kiin doesn't know what the future will hold for her.  Meanwhile, Kukutux has to decide how she will face the future with her family gone.  Left on the outskirts of her tribe, survival is tough and she has to make many sacrifices.  But opportunities are presented to her that many not be the best, but would ensure her survival.

I'm still trying to figure out if I like Kukutux.  I certainly don't think her story added much aside from showing different ways of life that happened.  She actually seemed to serve as a distraction from the main storyline and could have been edited out easily.  Kiin wasn't as engaging this time around either, although she's still a strong character and a central part of the story.  And as with the other two books, I still think the bad guys are really really bad without any redeeming qualities.

I'm not saying this book was bad.  When compared to a lot out there it's pretty good.  I just think that after the stronger start of the first two, this one just didn't finish the series as strongly.  It still showed a lot of history and was informative, you can tell the author did her research.  And it's still brutal with violence, rape, and other hard topics.  The pace was fast, I felt like we were bouncing around quite a bit with what was happening, but it was still easy to keep track of what was going on.

Not as good as the first two, but still not bad.  If you like historical fiction (and want to know how Kiin's story ends), this will be a good book for you.

My Sister the Moon by Sue Harrison 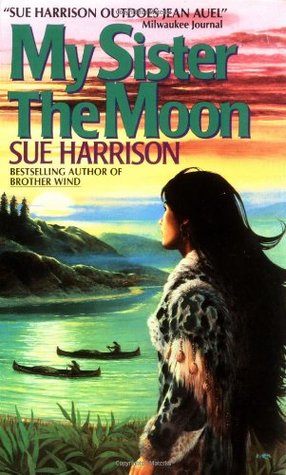 My Sister the Moon is the second book in the Ivory Carver Trilogy by Sue Harrison.  It picks up several years after the first book and follows the same tribe that was formed with Chagak, although the book doesn't focus on her this time.

This time it focuses on Kiin, who is only named part of the way into the book because she is so despised by her father.  Instead of being left for dead as an infant, the leader of the tribe decided to betroth his son to her and thus force her father to let her live.  Because she was not a son, he did everything in his power to make it rough for her.  Add in a brother who is jealous and Kiin had a rough childhood.  And it didn't stop there, shortly after marrying the leader's son, her brother kidnaps her and sells her, just when she's learned she's pregnant.

Kiin is another strong woman, just like in the previous book.  She has a lot of hardships thrown at her and the world is especially cruel to her, but she perseveres anyway.  And she also has a lot of talent, which helps her try to rise in the world.  Although she is still at the mercy of the men around her for the most part.  Which is discouraging, but relevant to the time period.  Again, the bad guys in this are bad with no redeeming qualities and while you can understand their motives, they still don't seem quite real because they are so bad.

There were so many twists and turns in this book.  Just when you think good is going to prevail something else happens to screw it up.  The theme for this book was very heavily weighted towards power.  Everyone wants power and control and don't really care if it hurts others in the process.  Because of this the book is pretty dark with topics covering rape, incest and lots of violence.  I would strongly suggest not reading it if any of these topics are too hard for you.  But it is very real because of that.  The world is not always a very nice place and this book illustrates that perfectly.

And because this book ended on a cliff-hanger, I of course have to finish the trilogy and find out what happens.  But I'm looking forward to it! 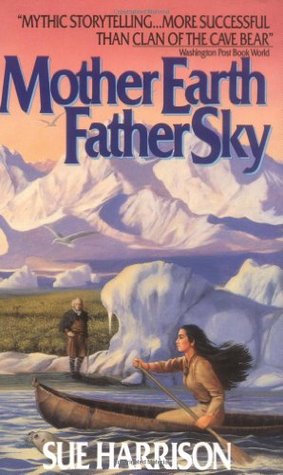 From the Gears, to Auel, there is a lot of historical fiction out there.  But it's an enjoyable genre.  So much so that I was compelled to start reading this trilogy, the Iron Carver Trilogy by Sue Harrison.  This is the first book in the series, Mother Earth, Father Sky, and it is followed by My Sister the Moon and Brother Wind.

Chagak is living a pretty normal life for her people.  As an adult, she will soon be married and is eagerly awaiting the prospect of a family of her own.  But one day, returning to her village, she finds it being destroyed by warriors from another tribe.  The lone survivor aside from her baby brother, she sets off for a different island with him in tow and manages to find an island inhabited only by a lone Shaman who allows her to stay.  But she's not the only one who finds the island and she has to learn to deal with the prospect of becoming a wife to the man who killed her family.

Chagak is a very strong character.  So strong sometimes that she doesn't' seem real.  But it was a different life and just because I can't fathom a reality like that, doesn't mean it couldn't happen.  And she has so many trouble that you really empathize with her and want the best for her.  I also liked the Shaman, he was very fatherly and helpful and just made you feel good about humanity.  That being said, he had his own troubles and could only do so much for Chagak.  Of course the bad guys were bad with few redeeming qualities and I thought that was a little bit of flat writing.  I like my antagonists with a little depth to them, but it's not an easy thing to do.

The plot was fairly simple.  Girl's village gets destroyed, girl goes out on her own, girl has to overcome overwhelming obstacles in a land where women aren't considered equals.  The history of humanity in the region.  But it's written cleverly enough that you get enveloped into the story and want to know what happens to Chagak.  If she can overcome all the odds and survive.  And if that survival will be happy.  There are a lot of tough scenes in it too, from rape to murder to other things.  Like most prehistoric fiction, it isn't for the squeamish.

An interesting start to the series.  It made me want to read the next one, that's for sure!